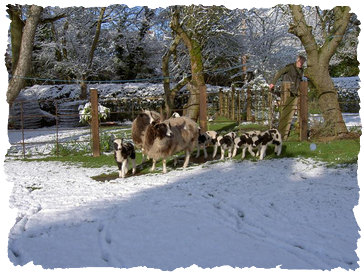 About three thousand years ago, Jacob – a well-known biblical character – worked for his Uncle Laban for a very  long time (about fourteen years to be precise)  By this time, although he was very fond of sheep, he was finding the work rather tedious and was more interested in women.  He asked his uncle if he could move on with his wives (who happened to be Laban’s daughters).  He said that he wanted no wages but asked that he be allowed to keep the new born spotted or speckled sheep of the flock.’ His uncle agreed, as these sheep were considered to be of no value whatsoever.

Inevitably, when isolated from the other sheep, the spotted sheep mated and gave birth to speckled lambs and Jacob built up a sizeable flock to take away with him. (This is probably the first recorded evidence of selective breeding!)

It is said that Jacob’s sheep and their descendents travelled from Palestine to Egypt and then to Spain via North Africa and Morocco.  In the 17 and 18 Centuries, they eventually arrived in England.oldest known English flock dates back to 1750 and still graze today at Charlecote Park in Warwickshire.

Although Jacobs are now bred for their attractive wool, sought-after skins and succulent meat, in those early days of the 18 century, their popularity lay in their ornamental appearance.  With splendid horns and distinctive fleeces, they made a significant contribution to the parklands and stately homes of rural England where they grazed freely with deer and demanded little time or attention of the shepherd.

Sadly, such neglect left them at the mercy of poachers and by the end of the First World War many flocks had disappeared, in the beginning of World War II, there were very few Jacob Sheep. 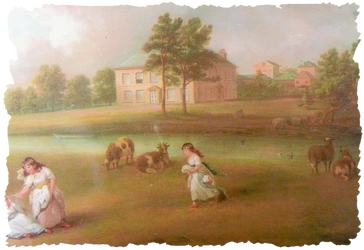 A small group of dedicated breeders determined to preserve the breed and in 1969, the Jacob Sheep Society was formed.  The founding member the Late Lady Aldington wrote to sheep keepers in various parts of the country and organised meetings. This enabled contact between breeders and a Society Flock Book was formed.

The Society is honoured to have HRH Princess Alexandra, the Hon Lady Ogilvy KG,GCVD as the Patron. The hard work of its 850 members has ensured that there are now over 5000 registered sheep in the flock book.

After years of debate, DNA testing has established that Jacobs are unrelated to any British breed.  Their closest relatives are, in fact, little known breeds in Kenya, China, Morocco and Tunisia. 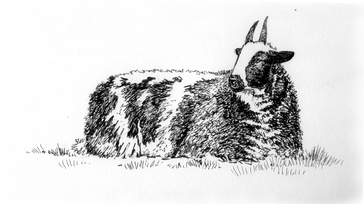 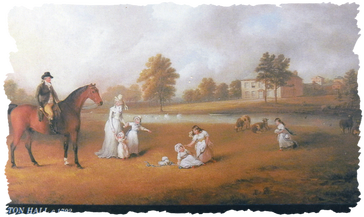 More mature fans of Radio 4’s The Archers may recall that in 1979, Jennifer was keeping Jacob's sheep and entered a pair of shearling ewes in the Royal Show!

That said, they have retained their self-sufficiency and the ewes require little help in respect of lambing.  They are able to produce quick maturing lamb with sound commercial potential.

By this time, Jacobs were recognized for their considerable variety of virtues which commended them as substantially more valuable than lawn mowers and landscape decoration.

Most people know the distinctive dark brown and white fleece produced by Jacobs. The two colours can be sorted to create up to five different shades with the mixed dark and pale producing an interesting grey/brown colour. It’s strange but true that brown and white together appear grey. The yarn looks more brown when spun with mohair because of the way it reflects the light. This is a popular wool for outer garments and when blended with mohair it makes a soft yarn ideal for scarves.


For more information about the Jacob Sheep Society, Regional Open Days, Shows, lacal breeders and the Jacob Journal, contact the Secretary, at www.jacobsheepsociety.co.uk